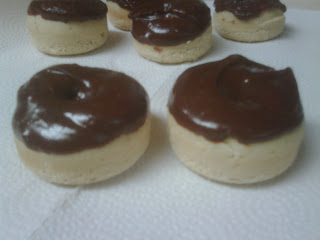 (Do you ever wonder if you should write out 'donut' or 'doughnut'?)You probably remember when I first made donuts last year. I bought my mini donut pan and baked away, and even though I like a real fried donut, these were a great alternative! As I was thinking up a menu for my Bridesmaids Breakfast, I toyed with the idea of baking donuts, so I wanted to try a chocolate glaze. I came upon this recipe from Alton Brown, and I have to say that it is definitely a winner. It is thick, chocolatey and sweet. My only caution to you is the you need to work fast with it, as it harderns extremely quickly.

I actually realized later on in the day, when I opened the microwave, that I forgot to add butter to the donuts this time. I could tell that something was slightly different with the donuts themselves, but really it wasn't lacking as much as I would expect. After I glazed the donuts and let them sit, I threw most of them into the freezer on a plate until they were firm, then palced them in a ziplock to store in there. Now I can take out a mini chocolate donut one by one and not worry about over indulging! This would also be great on any type of sweet bread. (and I decided against baking them for the breakfast, since I already have enough on my plate to prep for it)


Combine butter, milk, corn syrup, and vanilla in medium saucepan and heat over medium heat until butter is melted. Decrease the heat to low, add the chocolate, and whisk until melted.

Turn off heat, add the powdered sugar, and whisk until smooth. Place the mixture over a bowl of warm water and dip the doughnuts immediately. Allow glaze to set for 30 minutes before serving
Posted by Unknown